As I have already told you, we had a very nice warm sunny day yesterday. And it was also a Mother's day. So instead of going to the store and buying my mum something, I decided to rather do something nice for her. I gave her a card that I made a short while ago especially for this occasion, I baked an apple pie and I went to the forest near by to pick some spring snowflakes. I think these are really pretty and there are so many at one place. See for yourself ... 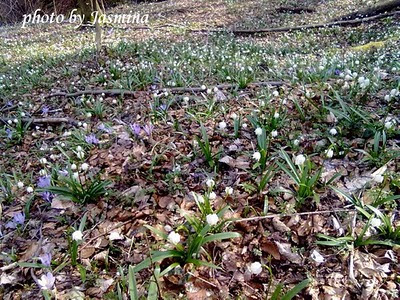 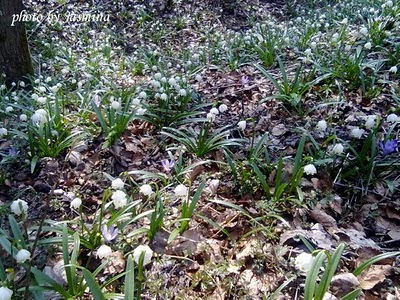 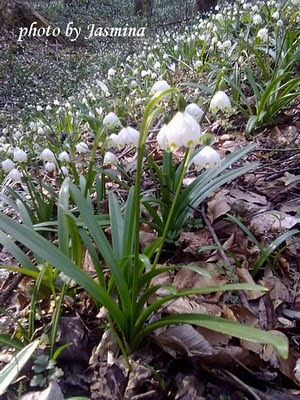 Aren't they pretty? I went to the forest with a friend of mine (Jasmina) and we both picked a bouquet of those. Jasmina had a cell phone with her and took these photos. But she kindly gave me permission to put them on my blog. :) Along with a card of course. ;) 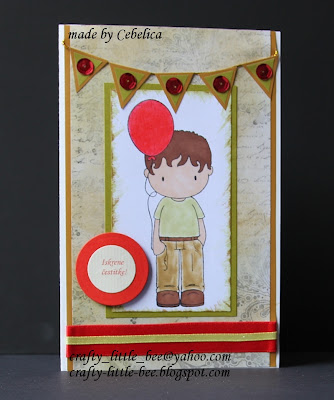 Here's another boy card that I made. I still have the feeling there's something missing though. I always want to add tons of embellishments on my cards. But on cards for boys that's not really an option. *sigh* I have to admit it's not among my favourite cards, but I don't think it's SO bad either. I admit - I am really not good at making boy cards. But I'm trying. Hopefully with time I'll get better. My boyfriend really dislikes this card - he says it's boring. And he's a boy. Ooops! I still have lots to learn. *blush*
The image is from Sugarplums and it's called Balloon Trevor. I colored it with Faber castell pencils, Promarkers and distress inks. I also inked the edges a bit. I didn't use any DP for this card. Just some plain papers from mystash and the "patterned" paper you see was made by me - I stamped on a white piece of paper using my Inkadinkado's Fluid motion stamps and then went over whole piece of paper with my distress inks (shabby shutters and brushed corduroy). On the banner I put some red confetti from my stash and in the bottom of the page I glued some ribbon from my stash.
There are a couple of challenges in which I'd like to enter this card:
One stitch at a time: Something for the boys
Crafty cardmakers spotlight: Make your own paper
Charisma cardz: Birthday for a teen
Really reasonable ribbon: One for the boys
Posted by cebelica at 9:55 PM