Angels we have heard on high

Heya! How are you doing? Have you had a good week so far? Mine's been very busy so I'm really looking forward to the weekend. Not only because I can relax a bit, but also because I am going to the chocolate festival (if it's not raining that is). For a chocoholic like me that'll be like heaven on earth. He he.

Some time ago I made this Christmas card, using a sweet Flying angel Tilda. 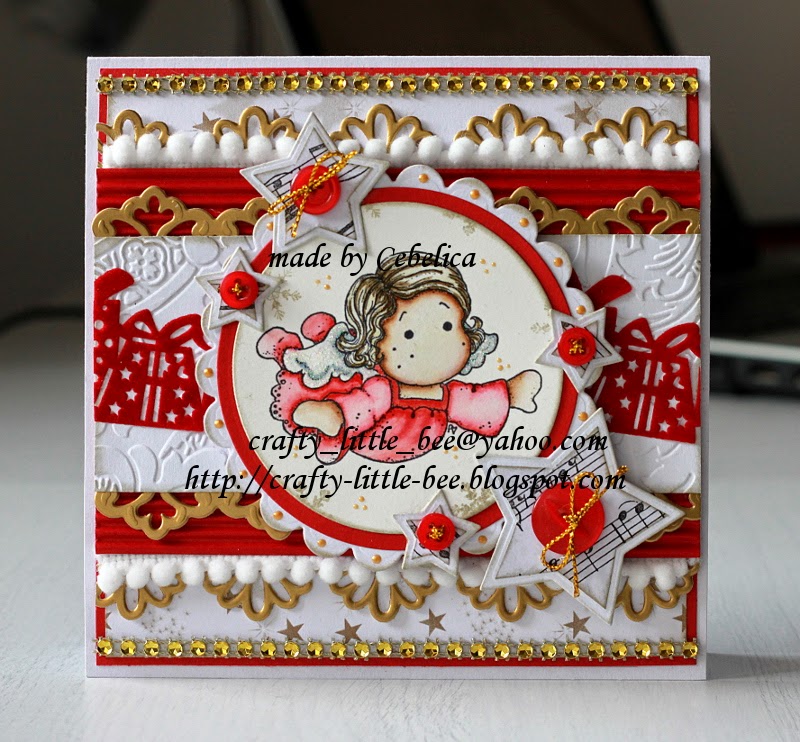 I really like red, white and gold colour combination, but for some reason I don't use it very often. However, I think it's perfect for Christmas cards. I've had this corrugated cardstock and the gold cardstock (the one I used for decorative borders) in my stash for what seems like forever so I'm really happy I put them to some use. The pretty cardstock with stars is from Folia. The white piece of cardstock which I used behind the image was embossed with Anna Griffin's embossing folder. See the red gifts behind the image? That's actually a trim/ribbon, which my sweetie bought me around Christmas. It's from Folia. The pom-pom ribbon and gold thread came from my stash. I used Nellie Snellen dies for the stars. The music paper is from my early teen years, when I was going to music school. I still have quite some of the music sheets left and they come really handy when I'm making cards. He he. The string of gold gems was cut from a gold mesh that I had in my stash. The buttons are from Crafty ribbons.

I would like to enter my card to the following challenges:
Tilda's town: Clean and layered or fussy and fancy
Marvelous Magnolia: Ribbon or bow
Time for Magnolia: Anything goes with Christmas
Allsorts: No flowers
7 kids college fund: Anything goes
Stamping sensatons: Use those dies and/or punches
My mum's craft shop: Anything goes
Natalie and Amy's challenge: Embossing
Sparkles Christmas challenge: Inspired by a Christmas carol/song (Angels we have heard on high)
CRAFT: Christmas
Posted by cebelica at 7:34 PM