From Easter to Christmas

Oh joy, what a lovely day I had today. It was quite busy but also wonderful. I did some shopping - after almost giving up on finding anything nice I found this fab t-shirt which I just had to have. And it was pretty cheap too, so double yay. ;) I also went to the store where they are selling crafting items, but I was a really good girl and didn't spend much (mainly because they didn't have anything I would really like though). I just bought some flowers and something to make my own flowers. I saw some really cute flowers online (but those were store bought) and I was like "hey, I could easily make myself those too". We'll see how it goes. I'm not sure when I'm going to try and make my own flowers like that, but when I do, I'll sure let you know. ;)

The card I'm going to show you today was made yesterday. It's VERY simple, but that's because I wanted it this way. I followed the sketch from Hanna and friends blog - it was perfect for the image I was planing to use. There are no other embellishments, just a couple of crystals, which I put in the center of the snowflakes, which I punched out with my snowflake punch. I used the Classic Santa stamp from Stampabilities. I colored the image with Faber Castell, Jolly, Pionir and Staedler pencils. 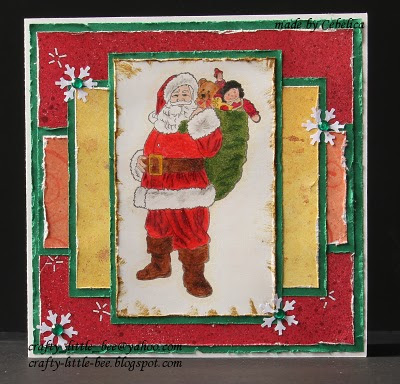 I'd like to enter this card to the following challenge:
Hanna and friends: Sketch
Posted by cebelica at 9:00 PM